Granada luthier Juan Miguel Carmona, who is part of the Carmona family of professional flamenco players that includes Pepe Habichuela, Juan Habichuela, Josemi Carmona. Juan Miguel has been making both classical and flamenco guitars in Granada for nearly 40 years and is the protege of the great builder Rafael Moreno Rodriguez, who has been his primary mentor and friend since the mid-1970’s when he built his first guitar under Moreno’s supervision. He has in recent years become influenced by Miguel Rodriguez of Cordoba and in particular the system used by Pepe Romero Jr. in his construction. 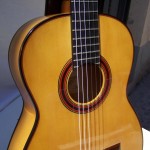 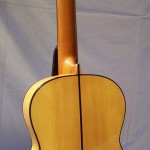