Otto Vowinkel was born in Amsterdam where he started making his first guitars in 1984. While at the beginning he was mainly inspired and motivated by the book ‘Classic Guitar Construction’ by Irving Sloane, he soon designed his own models, which reflected his preference for traditionally built guitars.In 1989 he met Dutch guitar maker Alex ‘Alejandro’ van der Horst (1959-2009) with whom he started working on a regular basis. They shared their ideas about ‘the ideal guitar‘ : a flexible tone, a quick response and the quality of the sound as the carrier of volume. Nowadays Otto Vowinkel is a household name in the classical guitar world; a master luthier with a strong preference for traditionally built instruments and with customers all over the world.His guitars are sold to clients all over the world. Among others, Vowinkel guitars are played by classical guitarists like the Amsterdam guitar trio, Sanel Redzic, Denis Azabagic, Tariq Harb and George Sakkelariou. Also within the jazz and tango scene Vowinkel guitars are appreciated and highly valued by guitarists like Leonardo Amuedo, Ernesto Snajer, Nelson Faria and Julio Cobelli. Otto Vowinkel was born and raised by a family of tailors in the old centre of Amsterdam.
The unique rosette design features the motif found in the flag for the city of Amsterdam. The headstock is carved in the style of the facade of his workshop.

Tthis guitar with its rosette design of concentric rings and unique headstock shape was developed and built by Otto Vowinkel for many years. Nowadays this guitar is hand built in the workshop of Picado (Spain). The characteristic playability and the clear sound make it a real Vowinkel. Unlike the concert model, the 2A model is not French polished but varnished. The Otto Vowinkel 2A model is physically light, very penetrating and easy to play. Volume is great with a lot of sustain and warmth. Overall a very impressive student concert guitar.

Tthis model is the entry-level guitar designed by Otto Vowinkel. Easy to play with a full, bright sound. Constructed using only solid materials and built in Spain with Vowinkel’s oversight. The design is based on Vowinkel’s standard concert model, which shows a preference for the southern Spanish style, most recognizably that of Granada, where the guitars have a lightweight, bouncy feel, with quick response and plenty of volume. An excellent choice for the beginning to intermediate student looking for a high-quality, well-built guitar. 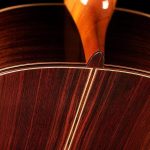 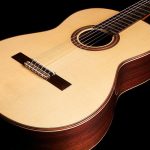